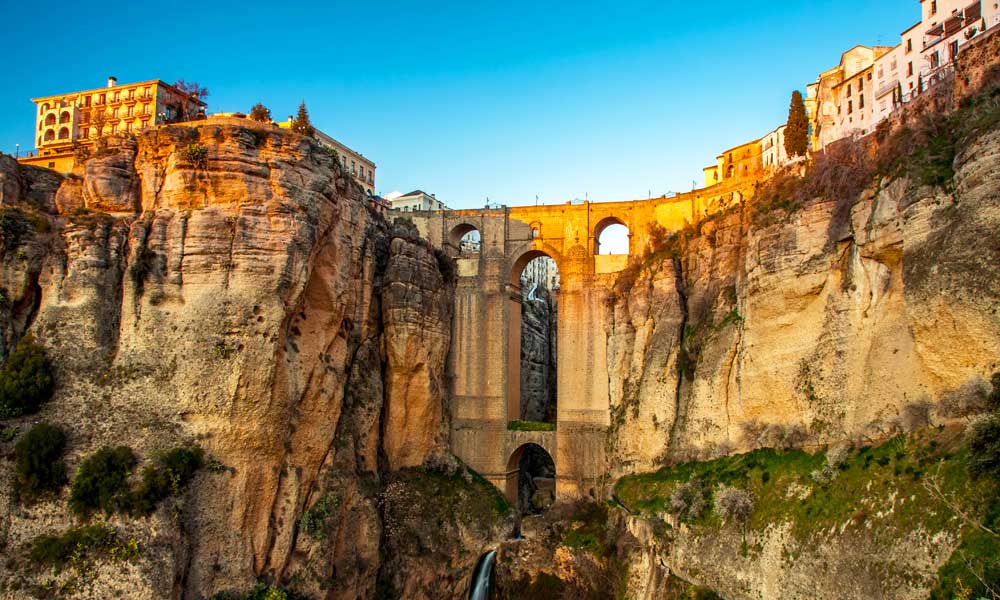 Ronda is a stunning white town just a one hour drive inland from Marbella which is famous for its breathtaking gorge, El Tajo.

The two parts of town – the Moorish Old Town and El Mercadillo are divided by the Puente Nuevo (New Bridge) overlooking the 100 metre deep gorge, which boasts spectacular views over the surrounding countryside.

The two parts of town are linked by the Puente Nuevo (New Bridge), which was built in 1751, and took 42 years to complete.

Ronda is not only a beautiful town to visit, with its historical attractions and quaint old streets, it also boasts one of the most famous fairs in Andalucia.

The September fair in Ronda has its origin in the city quarter of San Francisco, where it moved to in 1882. Up until this date, the May fair was the most important celebration in Ronda. However once the September fair was renamed the Feria Goyesqua Pedro Romero in 1954, after the famous bullfighter, the annual event grew in popularity.

When the first week of September arrives, Ronda´s streets are transformed into a riot of colour, music, dancing and singing, which can be heard for miles around. The Fair and Festival of Pedro Romero officially starts with the Parade, and visitors have an opportunity to admire the beautifully dressed women in their Goyaesque dresses.

Culturally, this is one of Ronda´s highlights, and features bullfights, a dazzling costume display and an exhibition of beautifully decorated carriages.

When the last day of the feria arrives, the town slowly returns to the 21st century.

Aside from the oldest bullring in Spain, some of the best tapas bars in Andalucia, and a stunning ‘Parador’ which seems to cling to the side of the gorge, Ronda´s rich history is both mysterious and intriguing. The bandits who operated around Ronda as far back as the 9th Century, were well hidden among the ravines, caves and valleys of old-time Andalucia.  The aristocrats and royalty who braved the journey were often held up by the bandits before they reached Ronda.

The Bandit Museum, the Museo de los Bandoleros, shows the history and lives of the infamous bandits who once terrorised the area.  Pictures, personal documents and paintings are displayed to give visitors an insight into the folk heroes and highwaymen who ran the Ronda region. Romantic figures to some, but murderous bandits to others.   If you are still in town later in the evening, try the superb Tragabuches Restaurant, named after the bandit – close to the Parador.

If you are looking to get away from it all, and you want a break from the busy coastal regions of the Costa del Sol, Ronda is easily accessible from all of the seaside resorts.

If you intend to visit during the Ronda Feria in September, make sure you book your accommodation early and enjoy one of the town´s top annual events. Ronda also boasts some excellent restaurants and tapas bars. Try Gastrobar Camelot or De locos tapas for a wide choice of delicious fresh fish, seafood and tender meat tapas with an Andalucian twist.

Properties for sale in Ronda

If you are looking to buy a property in Ronda you will find a wide choice of original village houses, villas, apartments and townhouses to choose from.